Nose
Forthcoming, rich and elegant with fairly sweet and distinct  PX and tight wood notes which are all well integrated, but different. The PX is lighter and more grapey, younger possibly, than that normally encountered in a brandy aged in PX butts, and the wood is not oak but chestnut, which leaves a tighter, less intense aroma allowing the spirit to shine through. There are traces of toasted nuts, maple syrup, raisins, rancio, chewing tobacco, fudge and brown sugar adding to the complexity.
Palate
The cask seasoning is very apparent in the spirit with a considerable residual sweetness which is a mix of caramel and PX making it much sweeter than most brandies from Jerez. It thus has a certain viscosity which makes it extremely smooth yet which does not obscure the fine quality of the spirit. It cries out for a good Habana and good company after a good dinner.
Comments
Ximénez Spínola is unique in many ways and their brandy is no exception. It is the only one bottled in the Marco de Jerez to be distilled from Pedro Ximénez grapes. While this means it cannot be included in the DO, such is its outstanding quality that they can sell every drop. The wine is distilled in alquitaras, a form of pot still, slowly and at a low strength. The spirit is then filled into a solera system of 750 litre toneles built from chestnut in the 1930s, laid down in 1948, and previously seasoned with sun dried PX. Chestnut used to be far more common in Spanish cooperage as it imparted few astringent notes and was strong but because of shortages caused by the Civil War it was replaced by American oak which has since become the norm. Occasionally toneles are re-seasoned to maintain the PX effect in these old vessels. Even though this brandy is bottled at 12 years old, it is the youngest in the range. The annual saca is just 10,000 bottles and each one is hand endorsed by José Antonio Zarzana, the ninth generation of the family.
Price
74.90 The Taste of Sherry 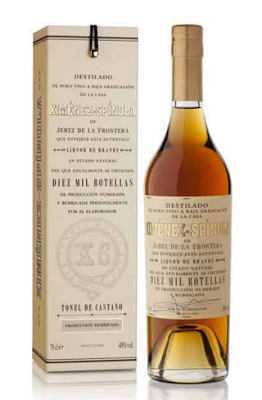