Appearance
Bright, slightly brass tinged gold with golden highlights.
Nose
Full, with slight oxidative and ripe apple notes up front and the faintest trace of a sort of strawy sweetness from the asoleo and the heat of the vintage. It is rounder, richer, riper and less crisp than standard Fino, but it could be defined as a Fino nevertheless. The oxidative character seems to slowly disappear replaced by notes of dried apricot and wax though and there is little or no flor.
Palate
Again full, like a slightly oxidised Fino only rounder and fruitier with pronounced apple/quince notes and with the slightest trace of sweetness. That is balanced by a refreshing and nicely balanced acidity and the drying effect of the chalky minerally character from the albariza. It certainly has body and is quite imposing but irresistably interesting as you can taste every facet of its production.
Comments
Yet another super interesting and top quality wine from Luis Pérez.The grapes came from the famous Viña El Caribe in the Pago Añina which once belonged to the lost firm of Sancho Hermanos in El Puerto. The albariza soil here is tosca cerrada and very pure. The vines are old and trained in the classic vara y pulgar system giving low yields and more flavour. Harvesting began in mid August and the bunches were picked by hand. After careful selection they were then laid out on the ground for sunning which lasted two days. They were then pressed in a small vertical press giving a yield of only 40% (70% is max permitted) and the must was filled into a couple of butts without racking and allowed to ferment without temperature control for two and a half months. No fortification was carried out. 2016 was  a rather hot year with plenty of Levante wind during summer giving the wine a more oxidative character. 2,000 bottles produced.
Price
42 euros per 50cl, De Albariza 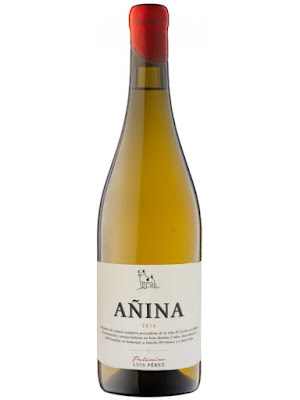