Very attractive mature nose with considerable depth and showing some flor - but much more. It has all the characteristic aromas of esparto, olive brine, sea salt and sourdough, along with a touch of cabezuela and faint hints of oxidation and a slightly humid buttery note which combine to give it great complexity. Classic Manzanilla pasada yet extremely elegant and harmonious.
Palate
This is delicious. Completely dry and super subtle with a gently salty tang enhanced by a hit of flor bitterness. There is a certain richness which comes from those oxidative and buttery cabezuela notes, which also give it a gentle texture and grip allowing the wonderful briny yeastiness to shine through in all its complexity. Once swallowed it just goes on and on.
Comments
This is only the 4th saca of this superb Manzanilla which is not released regularly but only when conditions are exceptional, and then only from very few carefully selected butts. It comes from the family reserve of the Manzanilla La Goya solera which used to be located in an old underground bodega called La Casa near Sanlúcar’s Bajo de Guia. When the firm relocated to the new bodega on the Chipiona road in 1989, the solera had to be moved and many of the old butts had to be repaired, stave by stave, so it took a while for the wine to settle, but it has certainly returned to its former glory. It is a Manzanilla pasada with an average age of over 10 years which is a blend of selected butts, and the saca is aged a little extra as a blend, or ”reposada” as the bodega calls it, before bottling en rama in Autumn 2017 and in very limited quantities. XL (excelente) is what the oenologist writes in chalk on the selected butts.
Price
22.95 euros per 50cl bottle, De Albariza 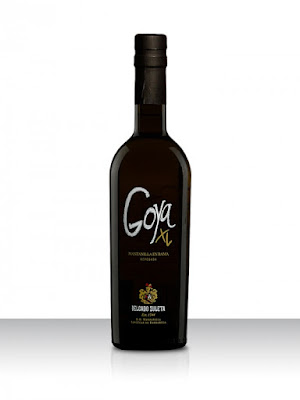