The 2018 harvest has finally came to an end. The total production stands at 81,314,507 kilos of high quality grapes with an average sugar reading of 11.15° Beaumé (as opposed to last year´s 11.8°) despite the unusual climatic conditions which delayed the harvest making it one of the latest in recent times. It was 8.6% larger than last year, not a million miles from the Consejo´s original estimate of 10%. A total of 29 press houses processed the grapes with the last ones to be pressed being those for the sweet Moscatel and Pedro Ximénez. A shade over 50% of the harvest was collected by machine. 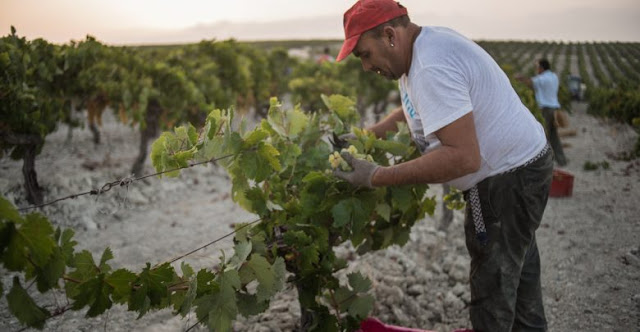 Rainfall was well above the average with 630 litres per square metre recorded at the weather station at Jerez airport, but it was very unevenly distributed with as much as 800 litres in certain áreas. Rain falls mostly in autumn and winter, but this year some two thirds of it fell in March, April and May so the soil took longer to absorb it and humidity was a problem early on with some outbreaks of mildew, but these were swiftly dealt with, albeit at considerable cost to growers.

Early summer temperatures were unusually mild with an almost complete absence of the hot Levante wind in July so the grapes ripened more slowly than usual, particularly in áreas nearer the coast where more humidity was brought on the westerly winds. Harvesting began in the inland vineyards on 23rd August, more than a week later than the recent average and more than three weeks later than last year, which was one of the earliest on record. All in all, it was a difficult harvest but with more than satisfactory results despite the complicated weather conditions.
Posted by Paula MacLean at 14:22