Appearance
Deep mahogany with copper highlights fading to amber with a trace of green at the rim.
Nose

Rich and fragrant with beautifully integrated notes of oak, Oloroso, walnut, praline and vanilla with  traces of dried fruit, a suspicion of orange and a gently sweet hint of brown sugar. This is a brandy with considerable class; it is complex yet fresh and open, and quite beguiling.
Palate
Full and rich and very smooth with no rough edges, it makes quite an impact at first then softens and rounds off with a faint bitter note, probably tannin from the wood, balanced by those brown sugar and orange notes, then hints of nuts and nut oil come through but the finish is dry. It is full bodied with lots of Jerez character and has terrific length.
Comments

Lepanto, which was launched in 1951 is the only brandy still distilled in Jerez and it is made from a base of Palomino wine made in Jerez. The wine is stored under inert gas while awaiting distillation to avoid any oxidation.The firm began distilling in 1844, and for Lepanto they use Charentais (Cognac) type stills which use the double distillation method. These have been replaced since then, of course - in fact the current ones date back to 1960 and each has a capacity of 25 hectolitres - but the method has not. The distillery is in the bodega Los Arcos in Jerez while the firm's other brandies are made in La Mancha. Only the hearts of the distillation, between 65 and 72% are used to make the holandas which then spend 12 years in ex Tio Pepe butts before being transferred for 3 years' finishing in butts which previously contained Matusalem 30 year old sweet Oloroso so the finished product has an average age of 15 years. The original Lepanto bottle was designed by the Real Fabrica de la Granja (est 1727) near Segovia. There are 3 versions of Lepanto: the standard 12 year old aged in Fino butts, this one, and the 15 year old PX finish. There was a limited edition (200 bottles) of Lepanto Aurum 30 year old, but that is now almost impossible to obtain.
Price
37.95 Roali 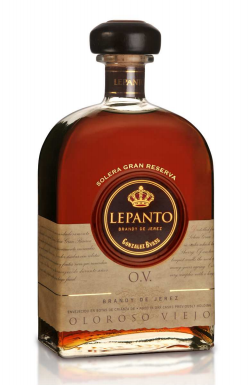