Appearance
Pale strawy gold with golden highlights and a good mousse with a little bead.
Nose
Fresh with faint lingering fermentation notes, but the appley Palomino shines through. There are also very slightly floral notes of straw and green herbs and a trace of lemon candy alongside the inevitable hint of salinity, and you can detect the skin maceration. Most attractive.
Palate
Dry, clean and well rounded with fruity notes of apple and quince and a trace of fresh apricot, while the  acidity is nicely judged and that hint of salinity, which gives away its Cádiz origins, really makes it dangerously moreish and the perfect accompaniment to all sorts of tapas, especially seafood.
Comments
This very small but very enterprising  bodega established in 2011 is located in San Fernando, Cádiz, and run by two brothers, José and Miguel Gómez, who decided to make artisan wines. Miguel was once involved with Alba Viticultores. They make small, but growing quantities of wine from local grape varieties fermenting them in tanks and ageing them in tinajas (clay jars) or wide rimmed amphorae of various sizes, something which dates back to Phoenician times, and now own 2 ha in Balbaina which they farm bio-dynamically. No additives are used and everything is done by hand. This is their first sparkling wine and it is made from Palomino by the “método ancestral” by which the wine is bottled half way through fermentation which began in fibreglass tanks with 7 days of skin contact. The grapes, which were harvested by hand,  came from two vineyards in Chiclana: El Marquesado on sandy soil, and another on albariza. 900 bottles produced with no added sulphites and 16 months on lees. A sparkling rosado has also been launched among other goodies. Can´t wait!
Price
10.80 euros, Licores Corredera 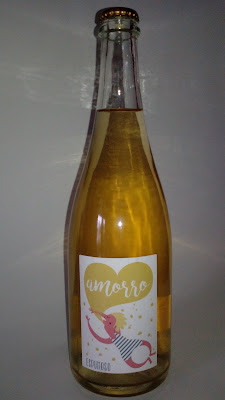