Clean, fairly light and very fresh, remarkably so for a wine which has had no refreshment in 8 years, though it is a little fuller. The flor is restrained and not particularly dominant and the aromas are more yeasty and bready yet a slightly more bitter serious note, a faint air of humidity and a trace of bitter almond behind gives it real charm, subtle complexity and style.
Palate
The bitterness of the flor and that almond is a little more pronounced and provides some welcome bite and perfect balance to a wine with fairly moderate acidity, yet it is also very smooth. And it is quite light too with a hint of leanness, and very elegant, dry and polished with a long finish that really makes you hungry. A lovely wine.
Comments
GB have released two vintage Finos in the Vinos Finitos (Finite Wines) range from two contrasting years. The wines come from the same vineyards in the pagos Carrascal and Macharnudo and were made exactly the same way, so the only difference between them is the year, so while they are both excellent they are very different. The chance to see how two vintages differ is rare in Jerez because of the solera system which was designed to iron out year on year differences. 2010 was a year with rainfall two thirds above the average and winds predominantly from the Atlantic, so described as cooler and fresher than normal, giving rise to a longer period of ripening before the hot Levante eventually took over in the second fortnight of August. This wine comes from a single butt sealed by the Consejo for virtually 8 years which provided 700 x 50cl bottles which were filled on 16th August 2018. Producing a Fino de añada of 8 years of age is very difficult in Jerez as the flor cannot be relied on to cover the wine all year round and for so long, so this is quite an achievement.
Price
32.75 euros per 50 cl, Licores Corredera 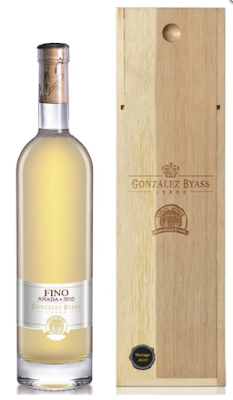