Ramón Jiménez Dávila was born in Albuñol, Granada in 1833 and established his wine business in 1860 at the Bodega Victoria on the west side of the Camino de Urdax (now Avenida de la Estación) in El Puerto de Santa María. He also purchased the Viña La Rosa vineyard in the pago Balbaina which supplied musts for some of his best wines, and recognising its quality this vineyard was extremely well cared for. It had been a vineyard since at least the mid XVIII century, having passed through the hands of "indianos", people who had returned after making a fortune in South America.

He married a girl from Sevilla, Rosario Mateos Garabito (1846-1921), and they had nine children; five girls and four boys who would continue the business after Ramón´s death in 1912 under the style Hijos de R Jiménez Dávila. The firm lasted until the 1960s and now the bodega complex has gone having been replaced by housing. 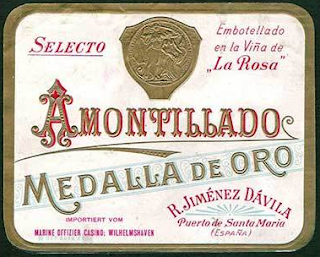 In those days there were some 25 bodegas in El Puerto (not to mention 18 cooperages and 8 distilleries!) and Jiménez Dávila was soon regarded as one of the best. His bodegas were full of infinite varieties of Sherry with an unusually large range of Amontillados ranging from wines which were still almost Fino to very old wines, as well as Manzanilla, Madeira, Málaga, Tintilla, Pajarete and Port, and business was brisk with a thriving export trade. As early as 1867 he exported over 260 butts.The firm won medals for the quality of its wines in every competition it entered. 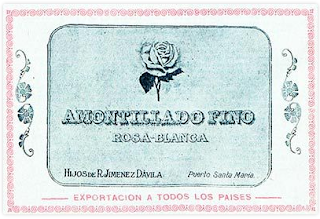 Some of the many brands were: Amontillados Medalla de Oro, Rosa Blanca, Rosa Encarnada, Rosa Amarilla, Rosa Aterciopelada, all from the Viña la Rosa, also Balbaina, Nobleza, Alfonso XIII, Reina Victoria, Imperial Añada 1754 (this was expensive at 25 pesetas a bottle when one could buy 5 litres of a 14 year old Amontillado for the same price!) Then there were Moscatel Casa Real, Pedro Ximénez NPU and Ponche Davila to name a few. 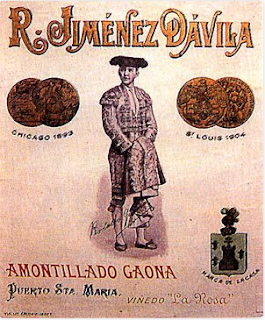 Grateful thanks to Bernardo Rodriguez Caparrini for information.
Posted by Paula MacLean at 13:59