Bright (after decanting), very transparent chestnut-mahogany, not particularly deep but some colour will have been deposited as sediment, copper highlights and very faint trace of green at the rim.
Nose
Elegant and classy, it has that attractive but almost indefinable smell of old wine which has been in bottle for a long time along with lovely nutty notes of lightly toasted almonds and hazelnuts and faint traces of raisin and salted caramel. There are also slight hints of sweetness, from sunned grapes presumably, and old oak, even a faint trace of smoke. It is very much Amontillado but very slightly different from how we know it now, yet lovely nonetheless and very interesting.
Palate
Super elegant and really quite fresh despite possibly 70 years in bottle, and while it is fairly high-toned, almost crisp at first, it becomes very smooth thanks to just a hint of glyceric sweetness and that raisin note though it is almost completely dry at the finish. It has the slightly oily, nutty, caramel character of a younger Amontillado but could have been around 12 years old at bottling. It is fairly light yet intensely flavoured, long and utterly delicious. What a pleasure to taste a style of Sherry which no longer exists - but just might be on its way back?
Comments
This legendary old wine was made from grapes grown in the firm’s Viña Blázquez vineyard in the pago Macharnudo. The grapes were briefly sunned before pressing as was the norm then and fermented to around 13.5 - 14%, so little or no fortification was needed. In fact the label states "Vinos criados al natural". It was aged in soleras at their now disappeared bodega complex on the corner of Calle Paul and Calle Sevilla in Jerez. Since Agustín Blázquez inherited the old firm of Paul & Dastis, the solera could have been very old. This is the Original Carta Blanca, a natural Amontillado with little or no secondary fortification. Annoyingly the label does not specify the strength. The firm was taken over by Domecq in 1973 and operated much as before until around 1997 when it was dissolved, the wines were removed to Domecq and the bodegas demolished to make way for housing. For a while afterwards, Carta Blanca was sold as a straight Fino, a completely different wine in other words. The original was probably the firm’s best known wine and a real example to today’s winemakers. It is very hard to estimate the age of this bottle, which is a classic old style "jerezana". It has a Consejo Regulador seal, so it is post 1933, and another seal with a symbol used in the Franco era, so it is pre 1975. The lack of alcohol declaration and lead capsule would put it back to before the 1970s, so it was probably bottled somewhere between the 1940s and 1960s, and judging by the bottle moulding, nearer the 1940s. The wine had a good fill level and remarkably little sediment and while the driven cork almost inevitably disintegrated, it had kept the wine well sealed and a beautiful aroma emanated from it as soon as it was opened.
Price
Can´t remember, had it for ages 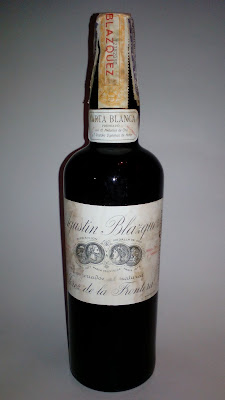