One might call this a sort of counter culture event. The name is a play on the humorously irreverent “ignoble, let’s push the boundaries” attitude of the young winemakers versus Vinoble, the more staid biennial event in Jerez. It was a showcase of mostly small, mostly young and dynamic producers of the really interesting wines Cádiz is more than capable of. And they were not by any means only from Cádiz, though mostly from Spain. Organised by Armando Guerra and his chums Buena Uva, it was always going to be a brilliant event - yet very serious as far as the wine was concerned - and it was deservedly a huge success, full of lovely people. 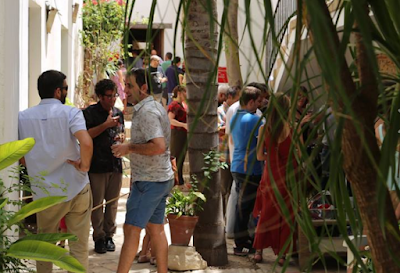 The venue was the beautiful hotel Posada del Palacio right opposite the colourful palace of the Duke of Montpensier (now the city council) and a stone’s throw from Barbadillo. The rear of the hotel is a rambling array of patios, passageways and a huge hall, all in classic Andalusian architecture and a terrific place for the different wine stands. An excellent jazz band played discreetly and very competently as glasses were swirled and acquaintances made or re-kindled.

As is often the case, it was an almost impossible challenge to taste everything and speak with people as well, and I only managed the wines from Cádiz, those closest to my heart and of which there was certainly no shortage. The quality of all the wines was excellent, as one might expect. There were three sessions; morning and afternoon, each with different stands, and the evening session was a team blind tasting competition.

Morning:
Viña El Armijo is in the pago Miraflores and belongs to the Florido family who sold Bodegas Gaspar Florido to Pedro Romero who later went bust. Some of the very old wine stayed in the family, and they are producing excellent Manzanilla, Amontillado and Oloroso and also have tiny stocks of wine from the famous GF25 and Ansar Real soleras.

Viña Callejuela go from strength to strength. The Blanco brothers have quite a range now and were showing their single vineyard table wines Las Mercedes, Hacienda Doña Francisca and La Choza, Manzanilla en rama and the latest 3/11 release of their unique vintage Manzanilla.

Mayetería Sanluqueña is a group of three ”mayetos” or growers, who have been encouraged by Ramiro Ibáñez to make their own wine, rather than sell grapes. These new 2016 wines have the same label, Corta y Raspa, which is a kind of pruning cut and are great examples of how different vineyards give different styles even when all else is equal. They call themselves “titans of albariza”!

There was also a man making and selling the traditional venencia of Sanlúcar, made from cane. 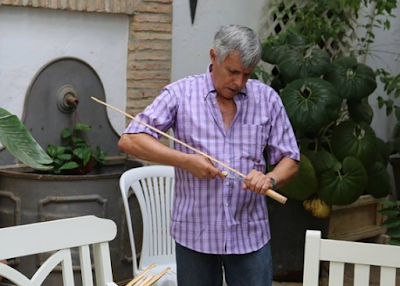 Afternoon:
Primitivo Collantes from Chiclana impressed many with their Socaire and Amontillado- Fino Fossi from magnums, among others.

Willy Pérez (“The Jerezano who always wanted to be a Sanluqueño”) was showing his lovely Tintilla, Marismilla rosé and the new Triángulo and Muelle de Olaso.

Forlong Alejandro Narváez waxed lyrical about their organic wines made in albariza near El Puerto de Santa María. Every one is delicious. 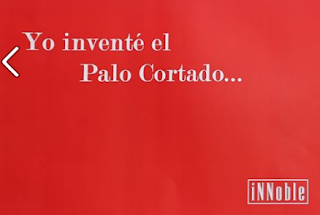