José de Fuentes Parrilla established his bodega in Jerez in 1871 and before long he had built a reputation for quality. The bodega was situated in Calle Méndez Núñez close to the railway station where he had a modern bottling line, being the first to export in bottle. There were connected buildings in the Calles Argüelles and Madre de Dios for cooperage etc, and another bodega in Calle Ramos. The adjacent offices were in a grand building on Calle Ferrocarril overlooking the station, and which is now in a very poor state of repair thanks to various failed projects for it.

José also owned vineyards which produced around 700 butts of wine, so he acted as a cosechero, almacenista and exporter, though his principal market was always Spain itself, where he held a royal warrant. Not only was he a producer of Sherry, but he also dealt in wines from Málaga, Madeira, Oporto, Alicante and Valdepeñas, as well as producing a range of “grande fine champagne” brandies, Uno, Dos and Tres Brillantes. Always innovating, he even produced an Espumoso, a sparkling Manzanilla. 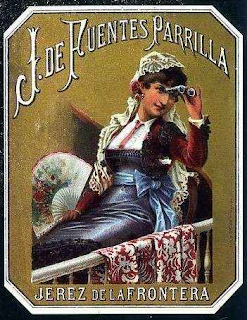 When José died in 1890 his widow, Mercedes Repeto Tobar continued with the business, now renamed Viuda de Fuentes Parrilla, assisted by her two sons, José and Julio de Fuentes Repeto who had been brought up in it. The business maintained its reputation until Mercedes decided to retire and in 1898 sold the bodegas, stocks and brands to Díez Hermanos .

The Fuentes Parrilla brands included Espumoso, the Brillantes brandies, Anis Seco and Moscatel Predilecto de Damas (bodegas have always assumed that women only like sweet wine for some reason).

A year later Mercedes’ sons set up their own bodega, Fuentes Repeto Hermanos, in Calle Ferrocarril which produced some outstanding wines. There is a story that they were opposed to entering wines in competitions, but a customer in Cataluña entered their cheaper range in a local competition and they all won gold medals.  However despite their expertise, ample capital and soleras dating from 1750, the firm only lasted till 1906.